Richard Allington has a chip on his shoulder. He has discovered that educational programs that benefit vendors get a lot of marketing support (from those vendors) whereas educational approaches that have no profit potential do not get championed by the for-profit sector.  In Proven Programs, Profits, and Practice, he vents about this reality, reviews the Federal policy towards literacy strategies, and then highlights ten strategies that are overlooked.
Rather than talk about the system of balances against private vendors is supposed to work, I'd like to list his ten programs, I find it very interesting.
I wonder when he wrote the article  what he would think of SpellingCity and Time4Learning's reading program. I wonder where he works / teachers?
(lets try seeing if we can get broward to the top for education with SC?)
at 7:49 PM No comments:

I've been working hard on reimagining what VOCABULARY LEARNING FUN can and will be.  I'm particularly impressed by the great new English Language Games In it's new version, we have great technology to build flash games and a network of teachers giving us input on wha they want with others helping us write it. Teachers take note: we are taking input on what sort of  free learning games you want.  So far, for example, we were told that there  really weren’t any sites that allowed you to practice analogies, for example. So we built a great collection of analogies and put them in a full interactive online flash vocabulary game.  Enjoy!
Analogy Games 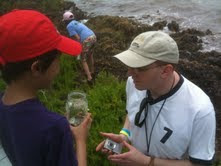 What's a BioBlitz?  A BioBlitz (per Wikipedia) is a special type of field study, where a group of scientists and volunteers conduct an intensive 24-hour (or 48 hour) biological inventory, attempting to identify and record all species of living organisms in a given area. The area chosen is often an urban park or a nature reserve of some sort.

National Geographic organized a BioBlitz this past Friday and Saturday to conduct an inventory of the wildlife on Elliot Key involving the public, Park Service, and all sorts of scientists and students. I participated and it was a blast!

My brother, son, sister-in-law, niece and nephew spent Friday (yup, some people skipped school and others skipped work) on our hands and knees along a few stretches of rocky coast turning over rocks, looking in the shallow pools, and grabbing little critters as we saw them. We were led by some first class scientists. Very cool.

In addition to our sample gathering along the coast, we saw how they capture and release the birds, spent some time with scientists finding an array of beetles and ants in a fig tree, and spent a lot of time where the real work is done which is the preserving, cataloging, and analyzing of the samples.

The most interesting fact that I learned was when a small fig was cut open and a small male wasp was found inside. It turns out that this type of wild fig is actually an inside-out flower with the pollen inside the fig. The male wasp has already fertilized the eggs and is depositing them inside the fig as well as pollinating it. I also had an interesting discussion about the genus and categorization of fruits. It turns out that fruits and vegetables are really gastronomical terms. In terms of botany, fruits are a very large category which includes melons and nuts and everything that includes the seed. I ran out of time but I've always wanted to understand the cateogries, botanically, of roots (carrots, onions, potatoes) and leaves (spinach, lettuce).  I've also wanted to figure out what's the difference between an herb (is it a leaf?) and a spice (pepper is a seed, salt is a mineral, mustard is a seed).

In addition to the significant scientific benefits of actually having an inventory of what can be found living in the park, the BioBlitz:
Great time had by all.